Are Buildings Getting Taller?

By Francesco Andreone on November 25th, 2021 in Australia Wide, News

Australian Strata Buildings are Getting Taller

Or, so says the Australian Bureau of Statistics …

From low rise walk-up strata apartment blocks in the 60’s and 70’s, we’ve seen bigger and bigger strata complexes each decade. But, they’ve also been getting taller and taller as the ABS’ analysis demonstrates.

I’ve written about the advantages of smaller strata buildings before in the article ‘Are Small Strata Fish Sweeter? Or, should we just throw them back into the sea …’ but, development trends in Australia have generally led to developers creating increasingly large strata complexes.

It makes sense commercially and from a profit perspective for developers and builders, government planning policies favour increasing densities, and, bigger strata complexes allow for more shared facilities to be provided at a lower per apartment cost.

The Australian Bureau of Statistics collects and publishes data as Australia’s national statistical agency and the official source of independent, reliable information. As the ABS says: they tell the real story of Australia, its economy, and, its people by bringing life and meaning to the numbers.

It looks at the growth in new strata apartment complexes based on the height of those buildings over 15 years between 2004 and 2019 and provides interesting revelations and insights.

So, here are my 7 key takeaways from that ABS data and report.

Those categories are arbitrary but, conveniently, the Low Rise category matches the only group of new strata buildings in Australia that get home building defect insurance cover over the last 15 years.

So, it tells me that all the other categories of strata apartment buildings [Medium, High and Super High Rise] which the data shows have grown disproportionately more over that time, have been uninsured for building defects.

That’s a pretty clear indication that the key focus of strata apartment developers is bigger and taller strata buildings. 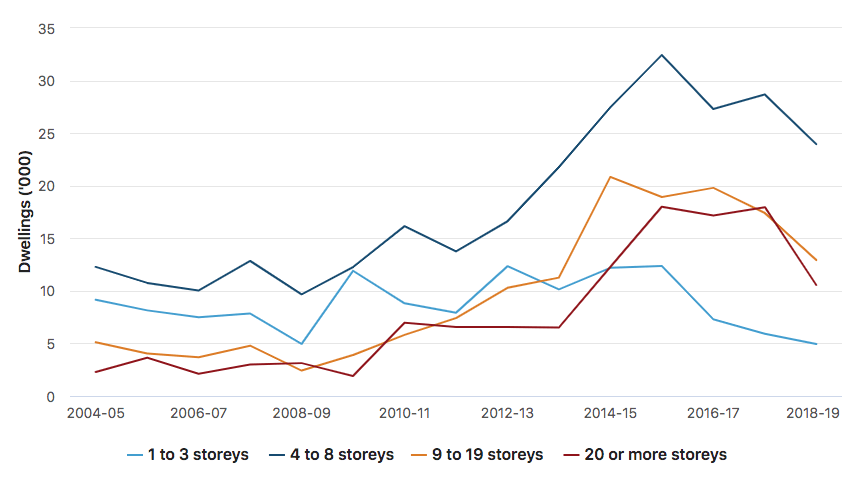 That matches most commentators’ views and other reporting that there’s been a slowdown in new strata development starts recently as I wrote about in the articles:

It also indicates [to me] that when there is market growth it happens disproportionately in taller strata complexes, and conversely, when there’s a contraction or slow down it similarly affects the taller [High Rise and Super High Rise] apartment complexes first and more quickly.

But, Victoria’s rate of growth in new Medium Rise apartments was highest at 189.8%, which is almost double.

That shows how popular new tall strata buildings have been in NSW and Victoria, and that there’s been a significant slowdown in their popularity in Queensland.

The data shows that the pipeline for new Medium, High Rise and Super High apartment complexes is largely the same with numbers at 4,670 for Medium Rise, 4,336 for High Rise, and, 3,942 for Super High Rise.

But, there are only 382 Low Rise apartments in the pipeline.

In many ways, this data confirms what many of us felt was happening intuitively.  But, it is still good to prove that intuition and to support real actions in response by government, the private sector, strata buildings and strata owners.

So, since we’re going to have more bigger and taller strata apartment buildings in the future than smaller and shorter ones, it means we’re going to need people, products, services and businesses that have skills suited to manage, repair, advise and care for those kinds of complexes.

Time to skill up [literally] everyone!

PLEASE SUBSCRIBE WITH US TO GET THE LATEST NEWS