A prospective unit buyer recently contacted us wanting to know whether it was worthwhile challenging a committee decision to refuse approval for their pet dog.

The buyer had the unit under contract and the finance condition was due in a week or so. The contract was otherwise unconditional, so that once finance approval was obtained and notified to the seller, the purchase would be completed.

The unit complex was multi-level, with carparks on the ground floor and residential units in the three floors above. Each unit had front and rear balconies. No units had courtyards. The buyer wanted approval for what would be considered a “medium” size dog i.e. roughly 18-20kgs in weight.

Through the agent, the buyer had made an application to the body corporate committee for approval of the pet dog. The committee refused on the basis that the scheme by-law provided that dogs must weigh 10kgs or under.

Was it worthwhile for the buyer to challenge the committee’s decision? The buyer could not bear to be separated from his dog but also really liked the unit…

1. A by-law which bans domestic pets, or any type of them, is almost certainly void.

2. A by-law which bans domestic pets over an arbitrary weight limit is almost certainly void.

3. A by-law which permits pets up to a certain weight limit without approval, but which imposes a requirement for approval over an arbitrary weight limit, is also likely void.

4. A by-law which permits pets after approval, but which imposes restrictions on the exercise of the body corporate’s discretion when granting that approval which are inappropriate to the circumstances of the scheme, is likely to be void.

5. A by-law which permits pets after approval, but which places restrictions on the exercise of the body corporate’s discretion when granting that approval which are appropriate to the circumstances of the scheme, is likely to be valid.

Of course the validity of the by-law is not the only issue. There is also the question of whether the decision made under it, typically by the committee, is valid. Taking these two criteria into account you end up with options which look like this: 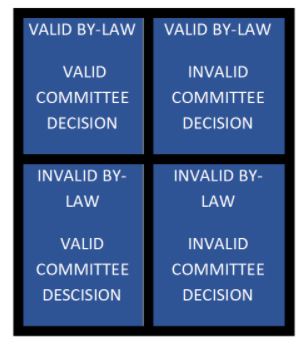 Considering that a buyer does not have standing to bring a dispute resolution application to the Office of the Commissioner for Body Corporate and Community Management, the buyer has the additional task of working out how to approach the matter. Take the worst-case scenario, for the buyer, which is a valid by-law and a valid committee decision. In the event of a pet refusal under these circumstances there is little point in the buyer continuing with the purchase if they cannot bear to be separated from their pet.

Conversely in the best-case scenario where an invalid decision is made under an invalid by-law, what is the best way the buyer could approach the matter? Arguably a letter to the body corporate committee informing them of the fact that not only is their decision wrong but also that their by-law is invalid. Further, the buyer could say that in the absence of a valid by-law the buyer (and for that matter anyone else) can have a pet “as a right”. Whilst that would no doubt cause some waves within the body corporate, it would be the legally correct position. It would also permit the buyer to continue with the purchase and keep their pet.

The two other options within the matrix require different considerations.

The fourth option is perhaps the most frustrating. That is because even though the committee’s decision is invalid, the by-law itself is valid. If the buyer took the risk of proceeding with the contract whether or not they put the committee on notice as to their invalid decision, all it

Unfortunately for the buyer that approached us, their circumstances fell into this fourth category. The committee’s decision was invalid. The committee had simply refused the pet on the basis that it weighed over 10 kilograms. The body corporate’s by-law however, permitted pets subject to body corporate approval. The committee was able to give that approval on conditions that it saw fit. Examples of some conditions were provided in the by-law including, most relevantly, that the pet weigh under 10 kilograms. This was not a mandatory condition, and neither was it expressed in such a way as to limit the decision making power of the body corporate. Based on the wording of the by-law the committee could have equally imposed of a condition that the pet weigh under 15 kilograms.

Given the difficulties associated with this option, the buyer understandably elected not to proceed with the purchase.

PLEASE SUBSCRIBE WITH US TO GET THE LATEST NEWS